Christ humbled Himself to save you

Our daughter Anna was three years old. It was a sunny summer day, and we went with her to the amusement park. There were different swings, trampolines, karts and carousels in the park. Our daughter wanted to take a ride on a train with a steam locomotive and cars. It ran in circles along the rails almost hidden in the thick green grass.

Children took their places in the miniature cars. Anna needed to get in, too. I sat her down in a well-viewed spot, and stepped aside. Other children were sitting down, too, and were getting ready for the ride. Suddenly a few short moments before the train departed, our daughter began to cry because she was afraid. She was drawing a lot of attention with her crying. “This train is not going to move until this child gets off and goes back to her parents, or her parents sit next to her,” the train keeper said sternly.

QUESTION: What do you think had happened after that?

We weren’t going to take her off this train, so there was only one thing we could do: take a ride with her. And I… climbed into the car. It was too low for me. I had to tilt my head to one side in order to fit there. The car was full with children. I sat next to my daughter and put my arm around her shoulders — it gave her more confidence, and she calmed down. The low ceiling didn’t let me straighten my neck; I felt very constrained and stiff.

I was twenty-eight then, and I clearly stood out from the bunch of the small children for whom this train was intended. I felt a bit embarrassed under the stares of other parents who stood behind the low fence around the railway.

Some looked at me with perplexity in their eyes, some with ridicule, and only my wife’s gaze inspired and encouraged me to endure this ride to the end. 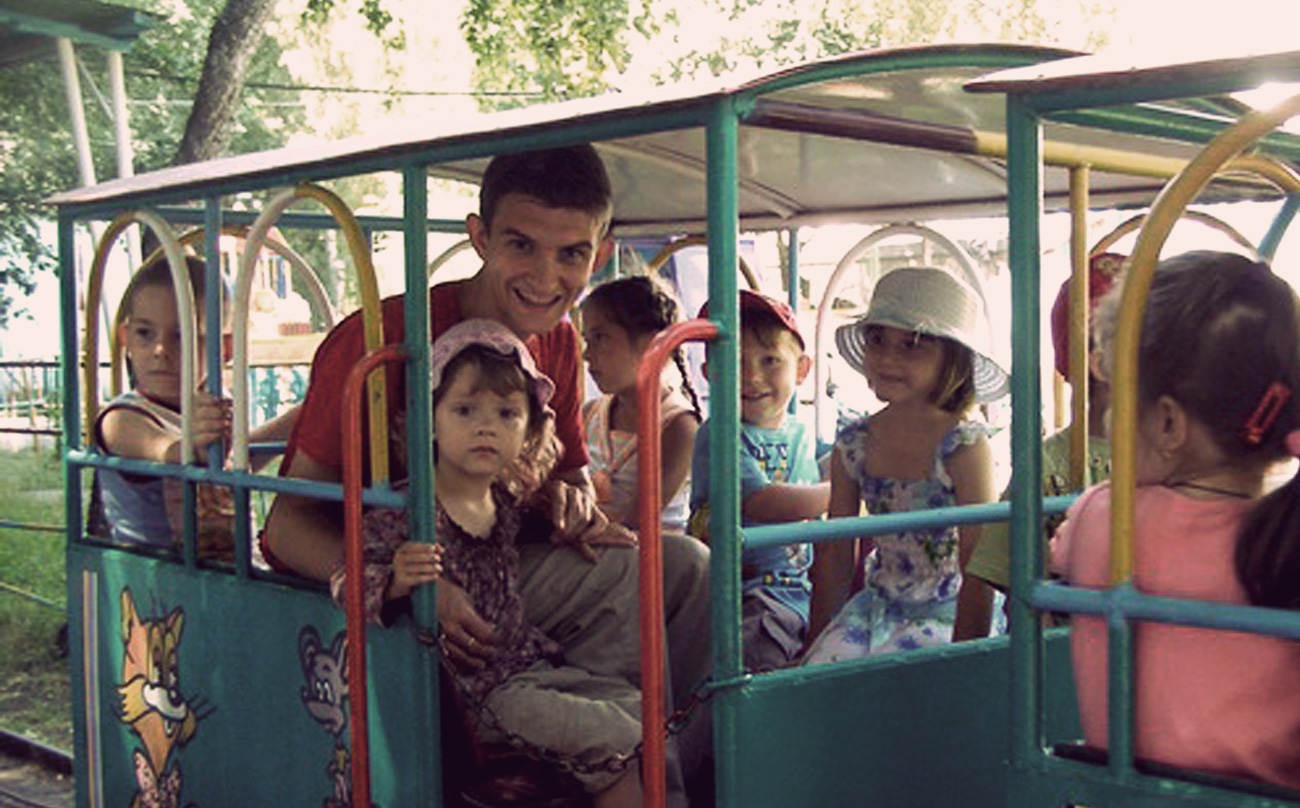 The doors to the cars were closed, and the little locomotive slowly dragged our train. The wheels squeaked and creaked, and I could fell how the rails were buckling under my weight. My presence in the car with small children might have looked a little strange, but I was no longer worried about it. It felt as I were a three-year-old child again. The world of this tiny car had become my own world for a short time. When I looked around I saw that the children were also looking at me intently. But I just kept smiling back and tried my best to cheer them up.

The locomotive completed its lap, and the ride was over. For the children it was a big lap of observation, but for me it was a circle of humility, if not humiliation.  I got off together with other children. On the platform the parents welcomed their children. My wife got to welcome me with Anna. That day I had a new appreciation of God’s humility… shown in Christ’s Nativity.

On that glorious Bethlehem night, the Son of the King of the Universe, Jesus Christ, humbled Himself and became like men:

“Instead, poured out in emptiness,
a servant’s form did he possess,
a mortal man becoming.
In human form he chose to be,
and lived in all humility,
death on a cross obeying” (Philippians 2:7–8)

The human body became a tight “space suit” for the Son of the King, and He was willing to put it on. In the plain sight of angels, archangels and cherubim the Lord Jesus minimized to a tiny human cell in the womb of Mary. He had become man! And all of that in order to one day die on the cross for our sins. Glory, praise, majesty and worship to the Strong, Powerful, and at the same time — to the Meek, prideless Lord of heaven and earth!

PRAYER: Worship God reflecting of the meekness and humility of Jesus. Thank Him that the Lord endured all of that for our salvation.

Instead, poured out in emptiness, a servant’s form did he possess, a mortal man becoming. In human form he chose to be, and lived in all humility, death on a cross obeying. Philippians 2:7–8
Category: M
Synonyms:
Bible Text:
Share:

Resources for worshiping as a family